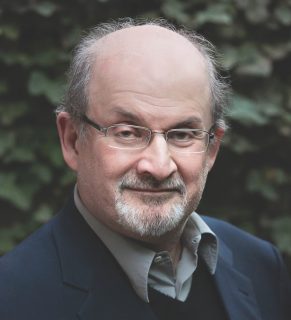 Introduced by former Poet Laureate of the United States Natasha Trethewey, preeminent author Salman Rushdie delivered the Inaugural Eudora Welty Lecture at the Washington National Cathedral in the nation’s capital on October 20. A sell-out audience of some 1,250 attended the event, co-sponsored by the Eudora Welty Foundation and the PEN/Faulkner Foundation in collaboration with the Folger Shakespeare Library. Rushdie spoke of his path to a writing career, calling on experiences of his early life in India and England.

The Eudora Welty Lecture is inspired by the lectures Welty delivered at Harvard University in 1983 as part of the William E. Massey Sr. series. Over three lectures (Listening, Learning to See, and Finding a Voice) Welty surveyed her life as a writer and detailed the inextricable bonds between her upbringing in Jackson, Mississippi, and her remarkable literary voice. The lectures were published as the memoir One Writer’s Beginnings.

Speaking at Harvard, she said, “The events in our lives happen in a sequence in time, but in their significance to ourselves they find their own order, a timetable not necessarily-perhaps not possibly chronological. The time as we know it subjectively is often the chronology that stories and novels follow: it is the continuous thread of revelation.” Following in the tradition of Eudora Welty, Salman Rushdie led the audience along his own thread of revelation.

Rushdie is the author of twelve novels, including the Man Booker Prize-winning Midnight’s Children, The Satanic Verses, The Moor’s Last Sigh, and, most recently, Two Years Eight Months and TwentyEight Nights. He has also published a significant body of non-fiction, including The Jaguar Smile, Imaginary Homelands, and The Wizard of Oz. In 2008, Midnight’s Children was named the best novel to have won the Booker Prize in its first 40 years of existence. He has won the European Union’s Aristeion Prize for Literature and is a fellow of the Royal Society for Literature and a Commandeur des Arts et des Lettres. In June 2007, Queen Elizabeth II awarded him a knighthood.

The publication of Rushdie’s The Satanic Verses in 1988 sparked immediate controversy in the Islamic world for its depiction of the Prophet Muhammad. The book was banned in many countries and, famously, burned in a public demonstration in Bradford, England. Iran broke diplomatic relations with the United Kingdom over its publication and placed threats on the author’s life, forcing Rushdie into hiding for years.

A project of national significance, the Eudora Welty Lecture was announced in February by The Washington Post.  The Post‘s article by Ron Charles may be seen here. The photograph of Mr. Rushdie is by Beowulf Sheehan.

Chosen from the most prominent writers working in the English language today, lecturers receive a $20,000 honorarium and present, as did Rushdie, an original talk on the topic of their creative origins.

Eudora Welty is the author of such acclaimed works as The Optimist’s Daughter, Delta Wedding and the short story collection A Curtain of Green. Her many honors include the Pulitzer Prize, the American Book Award for Fiction, and the Gold Medal for the Novel, given by the American Academy and Institute of Arts and Letters for her complete works in fiction.

In a 1965 essay, “Must the Novelist Crusade,” Welty addressed politics’ role in fiction: “Great fiction, we very much fear, abounds in what makes for confusion; it generates it, being on a scale which copies life, which it confronts. It is very seldom neat, is given to sprawling and escaping from bounds, is capable of contradicting itself, and is not impervious to humor. There is absolutely everything in great fiction but a clear answer. Humanity itself seems to matter more to the novelist than what humanity thinks it can prove.”