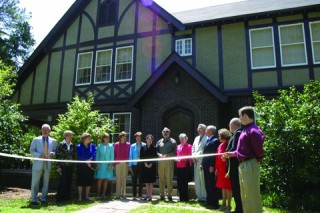 Ten years ago in April, the Eudora Welty House opened to the public after two years of meticulous restoration. The ribbon cutting ceremony is seen here. To celebrate the anniversary of this historic occasion, during the week of April 9-15 there were free tours and a series of events at the House and Garden. A flier of the activities may be downloaded here.

Beginning with the inauguration of “Second Saturday” on April 9, the House and Garden became open for tours at 9 a.m. and 11 a.m. and every second Saturday each month. 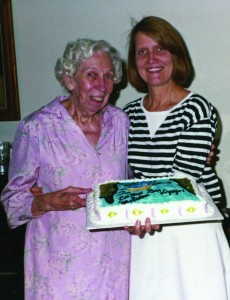 At 10 a.m. on April 9, Patti Carr Black, former director of the Museum Division of the Mississippi Department of Archives and History and a long-time friend of Eudora’s (the photograph here shows one of their many festive occasions), offered an informal talk on her 1995 photographic exhibit “Other Places.”

On Sunday, April 10, the Scholastic Writing Awards ceremony was held on the lawn of the Welty House. Over 300 students and their teachers and families were present. See related story in News and Events for details.

Each day the House and Garden was open for free tours, and on Eudora’s birthday, April 13, birthday cake and lemonade were served on the side porch of the Welty House throughout the day.

From 5 to 7:30 p.m. on Thursday, April 14, a “pop-up” art show by local artists, featuring renditions of Welty, her fictional characters, and/or her home and garden, were displayed.

The annual spring plant sale was held Friday, April 15, from noon until 6 p.m. (See related story and flier in News and Events.) Plants cultivated in the Welty Garden will be for sale, including daylilies and irises.

Rain forced the cancellation of the concluding event, a family “bring-your-own” picnic from 5 to 7 p.m. Friday night in the Garden.