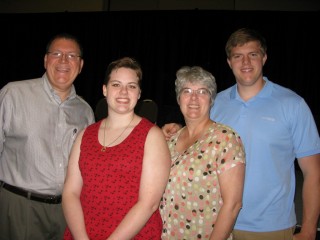 National winners included Merrilee Bufkin, Mississippi School for the Arts, Gold Medal, poetry, who was also chosen for an American Voices honor and read from her work at the ceremony. She is shown here with her family.

Bridget Edwards, Welty House director, and Jeanne Luckett, Welty Foundation Communications Coordinator, presented the awards. All national winners will be recognized at a ceremony in New York in May.

Another 108 awards — including 30 Gold Keys, 28 Silver Keys, and 50 Honorable Mentions — were presented at the awards ceremony. Download the complete list of winners here.