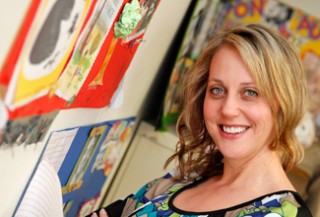 On Sunday, April 10, over 300 people were present on the lawn of the Eudora Welty House and garden as 139 winners of the 2016 Scholastic Writing Awards for the Mississippi Writing Region, including five national winners, were honored. They received a total of 274 awards at the ceremony.

The keynote speaker was Dr. Shalanda Stanley, a professor at Louisiana State University/Monroe and young adult author whose debut novel, Drowning is Inevitable, was published in September 2015. During the ceremony winning entries were read aloud, students received certificates, and their teachers were recognized. Guests also enjoyed a reception and toured the Welty House and Garden.

The awards program was open to public, private, and home schooled students in all 82 Mississippi counties, thanks to a generous grant from the C Spire Foundation.

In total, 562 entries were submitted including 34 senior portfolios by students from 47 counties. Of the 139 regional winners, 30 received Gold Key awards, five of whom were also nominated for American Voices (best in region) Awards. Silver Key awards were presented to 102 students, and 142 received Honorable Mentions. A complete list of winners may be downloaded here.

The following students from Mississippi were honored with national awards:

The Scholastic Writing Awards began in 1923, and the program has grown to become the longest-running, most prestigious recognition program for creative teens in the United States as well as the largest source of scholarships for young writers. The Alliance for Young Artists & Writers is the nonprofit organization serving as the administrator of the Scholastic Writing Awards. It partners with regional affiliates who administer the competition at the regional level.