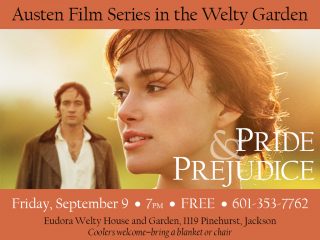 Authors Eudora Welty and Jane Austen lived in different centuries and on different continents, but similarities in their writing link the writers for fans today. Those connections have been highlighted with three programs during the late summer and early fall at the Eudora Welty House and Garden.

The Jane Austen film series is a partnership between the Eudora Welty House and Garden, the Jane Austen Society of North America’s (JASNA) Mississippi chapter, and Crossroads Film Society. The film series has been free of charge thanks to grants from the Mississippi Humanities Council and the JASNA.

“Eudora Welty was a great admirer of Austen,” said Carolyn Brown, a biographer of Welty and state coordinator of the Jane Austen Society of North America. Brown led brief discussions before the screenings. “Both novelists have a keen sense of the satiric, and neither needed marriage, children, or extensive travel to be shrewd observers of human behavior,” she said. Handouts at the programs prepared by Brown gave more details.

In 1965 Welty herself noted similarities between her novel Delta Wedding and Pride and Prejudice to help her niece, Mary Alice Welty White, with a school assignment to compare two authors. “In both, the family is the story, with its relationships and situations, and the matrimonial plot,” Welty wrote. “Neither (I hope) is sentimental. Instead, both are (I hope) observant and written with an eye and ear as sharp as possible.” A feature story in Jackson’s Clarion-Ledger by Sherry Lucas published on Tuesday, September 6, shared the term paper story.

“This series has been great fun for everyone,” said Bridget Edwards, director of the Eudora Welty House and Garden. Visitors brought their own chairs and blankets, picnics and coolers, and the Welty House and Garden staff offered popcorn and lemonade. The series is expected to resume next year.

For more information on the film series email info@eudoraweltyhouse.com or call 601-353-7762.