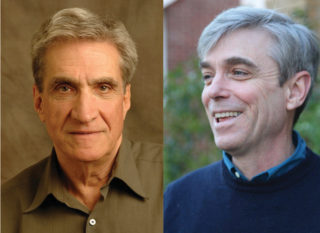 Free and open to the public, the reading will be followed by a reception. The series is presented in partnership with the Welty Foundation.

Pinsky is a world-renowned poet and is Professor of English and Creative Writing in the graduate writing program at Boston University. His work has received the PEN/Voelcker Award, the William Carlos Williams Prize, and the Lenore Marshall Prize, among many others. He was a regular contributor for many years to The News Hour on PBS, and his work is included frequently in such magazines as The New Yorker, The Atlantic Monthly, and The Best American Poetry anthologies. Pinsky’s most recent book is At the Foundling Hospital, published in 2016. Photo courtesy Eric Antoniou.

Miller has published five collections of poetry and has worked for the last three years as an editor at The Sheep Meadow Press in New York, after teaching 23 years at Millsaps. He received his Ph.D. in English from U.C. Berkeley, where he studied with Robert Pinsky. He has been a writing fellow at Yaddo, MacDowell, and the Fine Arts Work Center in Provincetown, among other programs. His second volume of translations of George Herbert’s Latin poetry, in collaboration with Millsaps Professors Emeriti of Classics Catherine and Richard Freis, will be published this fall. Photo courtesy CAMAC.