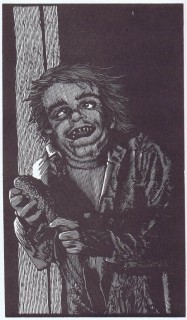 Understanding the Medusa, a thought-provoking and engaging new exhibit, is now on display at the Welty Education and Visitors Center. It considers the influence of mythology and fairytales on Eudora Welty’s fiction. “I just used (myths) as freely as I would salt and pepper,” Welty said. “They were part of my life, like poetry. . . .”

Coordinated by Welty education specialist Chase Wynn, the exhibit introduces Welty’s love of myths she read as a child.  Among her favorites was the story of Perseus and Medusa found in her edition of Our Wonder World, which is displayed along with images

of the Greek mythological hero whose task it was to slay the snake-haired woman whose gaze turned people to stone. 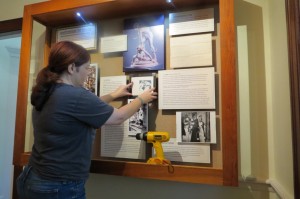 Also included in the exhibit is a letter Eudora wrote to her friend John Robinson in which she considered the duality of Perseus and Medusa as reflected in her own life. Welty’s short story “The Wanderers” contains the same theme, as discussed in the display — that Perseus is both hero and killer and Medusa is both monster and victim.

The exhibit features a tracing Welty made of Perseus beheading Medusa. Rachel Smart, exhibit specialist at the Mississippi Department of Archives and History and designer of the exhibit, is shown here installing the artwork. 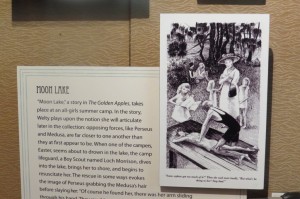 Another Welty use of the coexistence of opposing principles may be found in “Moon Lake” from The Golden Apples, as the exhibit relates. A drawing by Welty’s friend noted artist Mildred Nungester Wolfe depicts a scene from the story. The illustration, shown in the exhibit and at left, is from the Morgana edition of two stories from The Golden Apples — “Moon Lake” and “June Recital.” Several other Welty stories containing mythological themes and allusions are referenced in the exhibit.

Welty’s use of fairytale is most clearly seen in her first novel, The Robber Bridegroom. As Suzanne Marrs, Welty biographer and Welty Foundation scholar-in-residence at Millsaps College, notes, “As Welty read about the Natchez Trace, she recalled the fairy tales she had loved as an imaginative child, and she felt compelled to turn them into fiction.” 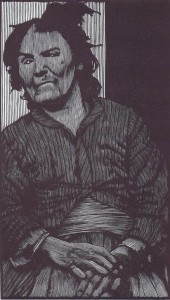 The exhibit traces the fairytale characteristics as well as the Perseus and Medusa-like duality found in The Robber Bridegroom. It is illustrated with renowned printmaker Barry Moser’s depictions of the story’s characters, published in a 1987 edition of the novel. Goat, shown at the beginning of this article, and Salome Musgrove, left, are two of the seven illustrations displayed in the exhibit. They are on loan from the private collection of John Evans and shown here with the permission of the artist.

Open Tuesday–Friday from 8 a.m. until 5 p.m., the Welty Education and Visitors Center at 1109 Pinehurst Street in Jackson, Mississippi, is free and open to the public. It contains permanent exhibits about the life and career of Eudora Welty as well as an orientation film.

Understanding the Medusa is a temporary exhibit that will be on display until August  2014. At the Center, visitors may schedule a tour of the Welty House and Garden next door. Admission is $5.00 for adults, $3.00 for students, and group rates are available.  Call 601-353-7762 for an appointment and details.