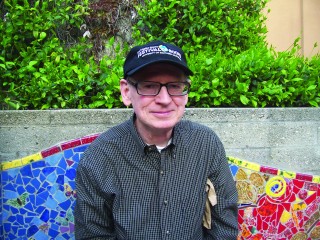 Suzanne Marrs and Tom Nolan, co-editors of Meanwhile There Are Letters: The Correspondence of Eudora Welty and Ross Macdonald, first met at the Virginia Festival of Books in 2006. It was then that Nolan, Macdonald’s biographer, proposed the idea for the book to Marrs, Welty’s biographer. “A splendid idea,” said Marrs, and they both obtained the appropriate permissions from the writers’ respective estates.

Nine years later, on August 20, 2015, at the Eudora Welty Education and Visitors Center in Jackson, Marrs and Nolan met in person for the second time to talk about their long-distance collaboration on Meanwhile There Are Letters and to read from the Welty—Macdonald letters. A book-signing and reception followed with more than 100 guests present. 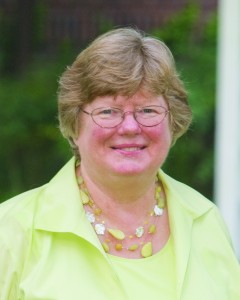 “Tom, with his incredible knowledge of Ken Millar (Ross Macdonald was Millar’s pen name), transcribed his letters, and I transcribed Eudora’s. We each contributed to the linking narrative and the notes,” Marrs, the author/editor of four other books on Welty and her work in addition to the biography and Meanwhile, added.

The new book documents Welty and Millar’s 13-year, deeply personal friendship, “an epistolary romance,” as some critics have called it. Welty and Millar/Macdonald, best known for his Lew Archer detective series, met in New York in 1971. Although they saw each other in person only five other times before Millar died of Alzheimer’s disease in 1983, they maintained consistent correspondence.

The cross-country separation of editor/biographers Nolan and Marrs repeats that faced by their subjects. Millar lived in Santa Barbara, California, with his wife, writer Margaret Millar, and Eudora lived in Jackson, Mississippi. Eudora visited the Millars in California three times in conjunction with the Santa Barbara writers’ workshops and once when she came to visit Ken as his health declined. Ken visited Eudora once in Jackson for festivities of the 1973 Mississippi Arts Festival, which honored Eudora with Welty Day. Coincidentally, Welty received the Pulitzer Prize for The Optimist’s Daughter at the end of that same week.

Nolan has been in Jackson once before, in 1990, to meet Eudora Welty when he was researching his biography of Macdonald. “I spent three days with her,” Nolan said. “She drove me all over town. We would go to lunch, walk around her neighborhood, meet and chat with people on the street, and spend time at her house as she reminisced about Ken. I had read her stories in college, but sitting in her living room talking with her was almost a surreal experience.”

Both Nolan and Marrs were gratified that Arcade Publishing was willing to issue such a substantial book of correspondence. It contains over 300 letters between the two friends, sharing thoughts about writing, families, politics, other writers, books, and their feelings for one another. Only 14 letters of their extant correspondence were omitted—letters that tended to reiterate information found elsewhere in the volume.

A bonus came near what Nolan and Marrs thought was the conclusion of their work when 20 letters from Welty to Millar were rediscovered by Ralph Sipper, Millar’s friend and a rare book dealer in Santa Barbara. “Those important letters filled gaps in the story line,” Marrs said, “enabling us to eliminate some of the linking material we had written.”

Sipper had inadvertently omitted these letters from the 150 or so Welty letters that Ken had saved and that Sipper had long since returned to her; Welty had kept all of Millar’s letters to her. With its recent acquisition of these last 20, along with Eudora’s donation of 325 others, the Mississippi Department of Archives and History holds an incredibly detailed record of the Welty/Millar relationship.

A native of Montreal, Canada, Nolan has lived most of his life in the Los Angeles area, where he began his career at age 5 — not as a writer but as an actor. His first appearance was in a Hallmark Hall of Fame special as the son of Henry VIII and had roles in many television series as a child and young adult.

Shifting his career to writing by age 18, Nolan has contributed columns, reviews, and other articles to numerous magazines and newspapers including Eye, Rolling Stone, The Village Voice, Ploughshares, Oxford American, and The New York Times Book Review. He is a long-time reviewer of crime fiction for The Wall Street Journal. His acclaimed Ross Macdonald: A Biography received the Macavity Award from Mystery Readers International and other recognition.

Both Marrs and Nolan are gratified with the positive reviews that Meanwhile is receiving. “We are pleased that so many people see the power of the letters and the powerful nature of Eudora and Ken’s friendship,” Marrs added.

A friend of Welty’s since 1983, when she came to do Welty research at the Department of Archives and History, Marrs did not know about the relationship between Welty and Millar/Macdonald until 1998. The late author Reynolds Price, English professor at Duke University and close friend of Eudora’s, told her about it and about the many letters they exchanged.

“As I worked on Eudora’s biography, I had the good fortune to read those letters, and I saw that they did indeed tell a love story, though not the story of a love affair. Ken and Eudora both honored the institution of marriage, and he was married, ” Marrs said. “But they loved each other nevertheless, and their love is particularly evident in Ken’s telling Eudora about his loss of memory and in Eudora’s efforts to support him through this terrible ordeal.”

The remarkable relationship between a “serious” writer and a writer of detective fiction has surprised a number of reviewers who had not realized that Welty was a devoted reader of mystery stories and that she revered Macdonald as a master of the genre. Perhaps it is symbolic that the only one of Welty’s numerous awards displayed at the Eudora Welty House is “The Raven,” the Mystery Reader of the Year award that she received in 1985 from the Mystery Writers of America.

The confluence of Eudora’s life with Ken’s did not end with his 1983 death but continued in her selection for this award and continues now in the book of letters Marrs and Nolan, themselves enthusiastic mystery readers, have compiled.