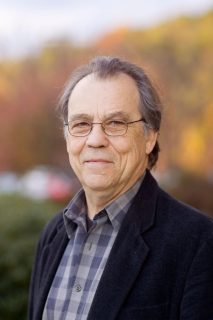 Jerome McGann, University Professor and John Stewart Bryan Professor of English at the University of Virginia, presented “Reading Poetry,” the first installment in this year’s Visiting Writers Series at Millsaps, co-sponsored  by the college English Department and the Eudora Welty Foundation.

Dr. McGann’s October 3 lecture presented a new way of studying poetry and elaborated on the following subjects. The single most influential modern book of poetry education was Understanding Poetry, by Cleanth Brooks and Robert Penn Warren, initially published in 1938 and reprinted thereafter in scores of thousands of copies.  It was written to replace a system of poetry (and language) education that had flourished for centuries in the teaching of classical languages and, later, vernacular English. That system was based in oral recitation and the sight reading of prose and poetical texts.

The Brooks and Warren program succeeded, spawning ever more sophisticated forms of “Understanding Poetry.”  Those educational methods have helped to gain poetry the bad eminence it currently enjoys in our schools. To counter the damage poetry education has suffered, we should consider shifting our focus from cognitions for understanding poetry to practices of reading poetry.

The author and editor of 23 books with another forthcoming, Dr. McGann has received numerous awards and honorary degrees and been awarded Guggenheim and Fulbright fellowships and grants from the National Endowment for the Humanities and the Getty, Delmas, and Mellon foundations.

The lecture was followed by a reception in the first floor lobby of the Academic Complex.