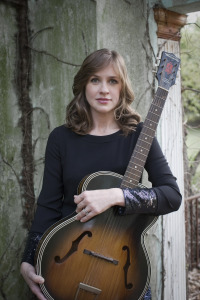 Traveling Shoes
” on the album. Joining her in harmony are Mary Chapin Carpenter and Aoife O’Donovan. Carpenter is a member of the Welty Foundation National Advisory Board.

Herring and Carpenter also joined singer-songwriters Claire Holley, and Kate Campbell for a concert during the Welty Centennial in 2009. These talented women have all written Welty-inspired songs and performed other Welty-related concerts from Atlanta to New Orleans.

A Mississippi native, Herring appeared in Jackson at Duling Hall on September 20 to an enthusiastic, full house crowd. Noted as one of the most literate and distinctive songwriters of her generation, Herring was also featured on Mississippi Public Radio’s “Thacker Mountain Radio,” which she helped found, on September 20.